The incredible art of the Bust of Nefertiti

Reckoned to be one of the best looking of the Ancient Egyptians, Queen Nefertiti was immortalised in a bust. It is one of the most important and famous pieces of Egyptian art ever to be discovered. It is a limestone statue sculpted by the skilled artist Thutmose. The piece was discovered by noted German archaeologist Ludwig Borchardt who then promptly smuggled it out of Egypt illegally in some broken pottery. The Egyptians would very much like it back! 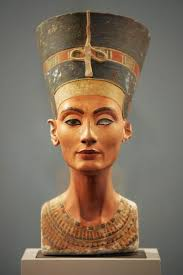 The bust was in a fantastic condition when found. Considering that it was first sculpted some three thousand four hundred years ago this is a considerable feat. You would think that it had had some Surface Treatments applied to it to keep it fresh. The only part of the bust that was missing was her earlobes.

There is some debate about whether Thutmose actually intended it for public display. The left eye socket is unfinished as it appears to have been simply filled in. This has created suggestions that it was Thutmose’s practice piece to show students, or even a bit of advertising to illustrate what he could do. It also means that we cannot be sure if it is an accurate portrayal of Nefertiti or just a flattering vanity project.