The key difference between tapping and thread-milling is that a tap is designed to cut a particular thread, while the thread in milling is determined by the controlled motion of the tool. Consequentially, a tap is always used to cut a thread into an internal surface – although a die works by a similar principle externally – while thread milling tools can be used to cut either internal or external surfaces. Each approach has different advantages and disadvantages. 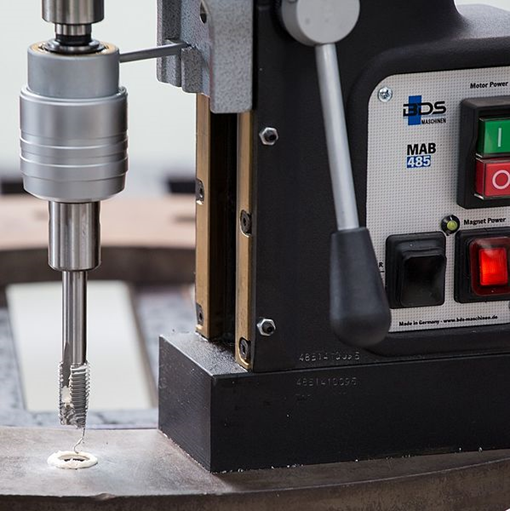 As a tap is formed with multiple cutting edges, it can complete its operation in a shorter time. Thread milling tools often have a single cutting point or edge and have to be moved forward to cut each individual turn. Thread milling machines rotate more quickly to compensate for this and sometimes have additional cutting edges (multi-form), but tapping generally remains quicker.

Thread milling requires the motion of the cutting edge to be programmed into a CNC machine, whereas a tap requires little or no programming once built; however, if multiple but different threads have to be applied to a single product, you need several taps and switching them will increase the overall cycle time.

A tap is designed to cut a particular thread into a particular sized hole and largely controls its own motion. In contrast, the motion of a thread mill is variable: the head can be programmed to perform a circular motion and thereby thread holes of varying diameters. They are also easier to combine into multi-purpose tools that perform additional functions, such as the initial drilling.

Thread milling requires a CNC machine capable of controlling three axes of motion simultaneously. Taps are more expensive to create, especially for a non-standard thread, but they have a simpler motion. Sophisticated tapping machines are more affordable for many operations and are available from companies such as https://www.cotswold-machinery-sales.co.uk/roscamat/.

As it cuts a smaller region at any one time, a thread mill sometimes produces a better result. It also enables some lower-powered CNC machines to cut deeper.

The initial portion of a rigid tap is designed to plunge into the material rather than to cut a perfect thread. This means a short distance at the bottom of a recess will not be perfectly threaded by a tap.

In general, tapping is recommended when you need to thread numerous identical holes.